Welcome to The Pilot’s Tip of the Week

Each Wednesday morning, you’ll get a short and useful tip in your email inbox with information you can use in your cockpit. You’re in good company — there are over 200,000 tip subscribers like yourself who are committed to improving each week. Many have been receiving these tips since 2006.

Below are popular resources taken from our online courses and pilot-friendly manuals. Developed by our award-winning instructors (see Bios below), they are packed with tips and techniques you can put to work on your next flight. Bookmark this page so you can return to these resources. This quick reference guide to non-towered airport communications provides clear guidance on what to say and when to say it as you maneuver for takeoffs, landings or pattern work. Great for new students or as a refresher for rusty pilots.

From our VFR Comms Manual You’ve got the whole family on board for a weekend trip. However, the landing attempt on a runway that’s short and obstructed didn’t go so well. Will an immediate go-around safely clear the trees—or result in a catastrophe. Watch the video and decide. Many pilots shy away from landing at Class B airports — but watching a Cessna 172 land between Boeing jets at Boston’s Logan International (KBOS) is interesting whether or not you ever want to do it. Watch this high-workload approach and landing. 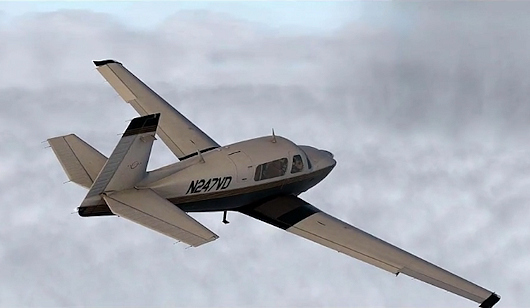 The most important meeting of your life is just one simple LPV approach away. However, encroaching weather is putting on the squeeze, so you speed things up with a tight intercept. Should you salvage this situation—or go back into the worsening weather? The Power of Performance Profiles

Countless Instrument pilots have wasted valuable training hours—and struggle to this day—because their instructor skipped this first critical step during IFR training. Here’s the step-by-step process for creating the essential performance profiles for each airplane you fly.

From IFR: The Missing Lessons Setting the mixture control for cruising flight shouldn’t be complicated — yet it’s persistently one of the most contentious topics of engine management. This short guide will help you lean your airplane engine for best economy, performance, and longevity.

From the Airplane Engines Manual National CFI of the Year, DPE

Doug owns and operates his own flight school specializing in instrument training and has logged over 12,500 hours of dual instruction given, with over 5,700 hours of that being instrument instruction. He regularly gives instruction in aircraft as simple as the J-3 Cub, and as complex as the Piper Malibu / Mirage. Master CFI Tom Turner holds an ATP certificate with instructor, CFII and MEI ratings and has a Masters Degree in Aviation Safety. He was the 2010 National FAA Safety Team Representative of the Year and the 2008 FAA Central Region CFI of the Year and has logged over 2,500 hours instructing. In 2015 Tom was inducted into the NAFI Flight Instructor’s Hall of Fame.

Tom was a Captain in the United States Air Force and has been Lead Instructor for the Bonanza pilot training program at the Beechcraft factory. He now directs the education and safety arm of a 9000-member pilots’ organization. DPE, CFI of the Year

Bob Nardiello was the “Flight Instructor of the Year” in 2004 and “FAA Safety Counselor of the Year” in 2006 for the Windsor Locks Flight Standards District Office. He has over 14,000 hours of total flight experience, with more than 7,500 hours as a Flight Instructor. He currently holds CFI, CFII, MEI, and ATP ratings and serves as a Designated Pilot Examiner. Bob was the Chief Flight Instructor at a Part 141 Flight School and is also a seasoned charter pilot flying a Cessna 421, Citation Ultra and Citation Excel. John Krug’s 27 years of experience as an Air Traffic Controller combined with his experience as an active flight instructor and charter pilot, allow him to assist pilots in gaining a better understanding of the ATC system and how to best operate in it. While with the FAA, he was an On-the-Job-Training Instructor for new controllers and worked as a Quality Assurance Specialist, responsible for conducting in-flight evaluations of the Air Traffic System and investigating accidents and incidents. Bob Martens is a nationally known speaker, consultant and aviation safety expert. He retired from the FAA after spending 17 years as a Safety Program Manager. In this role, he delivered hundreds of live seminars devoted to General Aviation safety. Bob retired from the USAF (rank of Colonel) in 2000 after 30 years of active and reserve duty. He was an Aircraft Commander in a C-5A and also served as Flying Safety Officer and Chief of Safety with the 439th AirWing. Bob has logged thousands of flight hours in both military and GA aircraft. Rod Machado has taught millions the basics of flying through flight lessons, simulation and training materials. Teaching and speaking to pilots in the 50 states and Europe since 1973, he simplifies the complex, makes bland topics interesting and educates with humor.

Flying since age 16, he is a rated ATP with all fixed wing Flight Instructor ratings, he was AOPA’s National Flight Instructor Spokesman and a columnist for AOPA Pilot and Flight Training magazines for many years. He has given over 10,000 hours of dual instruction given. Ryan is responsible for the design and development of our new online training courses and pilot-friendly manuals, and oversees the course development team. He is also an active flight instructor specializing in instrument flight and is a flight simulator expert. He currently instructs out of Wausau, WI and has experience doing remote flight instruction via simulators.

Ryan was the driving force behind the development of several PilotWorkshops online courses, including Instrument Rating Accelerator, IFR: The Missing Lessons, Garmin GTN: Next Level, and Advanced IFR. Ryan is also a contributing expert for PilotWorkshops’ IFR Mastery series and is a regular participant in the Instructor’s Roundtable. He teaches ground schools, runs ATC communications courses for both IFR and VFR pilots, and has developed curriculum for a variety of IFR proficiency programs, and a simulator-centered high school aviation program. Paul Bertorelli is an ATP-CFII and in addition to instructing, he has been a charter pilot and sometime skydiving aircraft pilot. He’s also an experienced skydiver with more than 3,000 jumps. He’s currently editor at large for www.avweb.com and has been the editorial director and editor of Belvoir Media Group publications including IFR, Aviation Consumer, Aviation Safety and IFR Refresher. He has produced numerous aviation videos. He lives near Sarasota, Florida. Dr. Scott Dennstaedt is an FAA-certificated instrument flight instructor and former NWS research meteorologist specializing in aviation weather training. He is the founder of EZWxBrief. Scott is the author of The Skew-T log (p) and Me: A primer for pilots  and co-author of Pilot Weather: From Solo to the Airlines and has written over 300 articles for various aviation magazines including IFR, Plane & Pilot, Pilot Journal, Flying, Aviation Consumer and Twin & Turbine magazines. Katrina is an air traffic controller with 14 years of experience in tower, approach, and center on both the east and west coast. She started her career as a pilot and has logged over 5000 hours, including Part 121 and Part 135 flight experience. She returned to General Aviation when she became a controller and is an active flight instructor in a busy metropolitan area when not controlling airplanes from the scope. Bruce Williams is the owner of BruceAir, LLC, an aviation consulting, training, and pilot-services company based in Seattle, WA. He has been a pilot since the early 1970s, and he is a certified flight instructor and FAASTeam representative in the Seattle area. Today, he focuses on training in technically advanced aircraft (TAA), the Beechcraft Bonanza series, and stall/spin/upset recovery courses in an Extra 300L aerobatic aircraft. He also instructs at Galvin Flying Services at Boeing Field. During a 15-year career at Microsoft, he worked on six versions of Microsoft Flight Simulator. In the 1980s, he edited the Western Flyer (now the General Aviation News). He is also the author of two books about using PC-based simulation to complement flight training, plus many features on a variety of topics for aviation-focused periodicals.  Bruce publishes an aviation blog at BruceAir. Michael Goulian is one of North America’s most decorated aerobatic pilots and recognized aviation professionals, starring in air shows throughout the country and having won multiple U.S. Aerobatic Championships and multiple Red Bull Air Races.

In addition to his air show and racing credentials, Michael is a Certified Flight Instructor. A firm believer in scenario based training, Goulian is a Cirrus Standardized Instructor Pilot (CSIP), and regularly traverses the country in a Cirrus SR-22, delivering talks to aviation groups designed to increase the awareness of safety and proficiency amongst the general aviation pilot community. He owns and operates Mike Goulian Aviation in Plymouth and Bedford, MA, which serve as Authorized Cirrus Training Centers. Catherine Cavagnaro (CFI-I, MEI, ATP, DPE) offers spin and aerobatic instruction in addition to her position as Professor of Mathematics at Sewanee. She is a monthly contributor to AOPA Pilot Magazine and serves as a Designated Pilot Examiner for the Nashville FSDO. Catherine is the 2020 FAA Certificated Flight Instructor of the Year and the 2018 FAA Safety Representative of the Year. In 2018 she was inducted into the Tennessee Aviation Hall of Fame. Dean has been turning wrenches on piston-powered airplanes in the Shenandoah Valley of Virginia for 25 years. He also seeks out inspiring aviation adventures whenever he can. Dean hosts the Airplane Owner Maintenance podcast, which he launched in 2015. He says it’s a great source for inspiration and motivation as he gets questions from aviators all around the country and beyond. Kevin Plante has been an Air Traffic Control Specialist for 16 years and has been fully certified in several different towers and TRACONs.  His ATC experience has been in both USAF and FAA facilities.  Kevin currently works at a busy TRACON controlling a wide variety of aircraft into airports of every airspace classification.  Additionally, Kevin has worked with the design and modification of PBN procedures, implementation of new equipment/software into ATC facilities, and On-the-Job-Training of new controllers.

Kevin has been flying since 1997. He flies for personal travel as well as working as a contract pilot for corporate and charter operators. Elaine is a six-time Master CFI with over 3800 hours of dual given. She provides instruction in high-performance and tailwheel airplanes, flies corporate aircraft, and presents pilot seminars in collaboration with her FAASTeam colleagues in Wisconsin. She’s also a skilled instrument instructor and a contributing editor to IFR magazine. She especially enjoys teaching emergency procedures and training future CFIs, providing stall/spin endorsements in a Super Decathlon.