"I’m instrument rated, but I struggle to copy clearances in one shot. I feel like a moron when I ask them to repeat it. Any help would be appreciated." — Martin G. 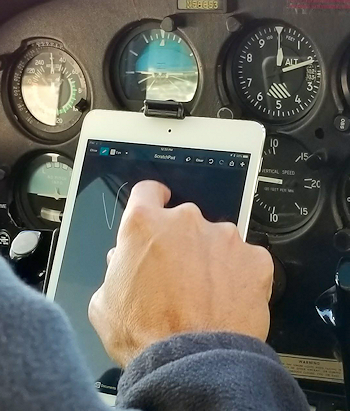 “Picking up a clearance can be very intimidating—especially if you’re dealing with a controller who had a lot of coffee that morning and is spitting out the clearance at Mach 2.

Understanding that all clearances follow the same format can help. The acronym to remember is CRAFT. It stands for Clearance limit, Route, Altitude, departure Frequency, and Transponder code. Clearances follow that format regardless of how one gets it.

Making your life easier with CRAFT comes in two parts. First, write down the CRAFT letters on your paper or iPad and fill out everything you can before calling for the clearance. (ForeFlight has a special scratchpad just for this.) The clearance limit is almost always your destination airport, so write that in. The overlying Departure or Center frequency is listed with your departure airport’s information. Write that in. If two frequencies are listed, write both and cross one out later.

The route is where pilots usually have trouble. If your app notified you of an expected route, you could fill that in. Likewise, you could write in what you filed. Just know you may have to fix some, or all of it. Or just leave the route blank, the way you’ll leave the altitude and transponder code blank as well.

Now call for your clearance. For anything that matches what you already wrote down, great! You don’t have to write anything. If something is different, cross it out and fill in the correct details.

If you’ve got an ATC speed freak reading your clearance at warp speed, and you’re scrambling to keep up with them writing down a route that’s not what you filed, just stop writing when you fall behind. Listen to the rest of the route and start writing again when you’re assigned the altitude (and any expected higher altitudes), along with the departure frequency, and the squawk code.

The controller can then confirm everything you read back and simply add that, ‘after V270 the rest of the route is DNY LAAYK LVZ.’  This can save a lot of time. Not to mention if you get bogged down with a bunch of fixes you haven’t a clue how to spell, you’ll probably miss the altitudes, frequencies, transponder code, and void time (if there is one).

So don’t fixate on the fact that you missed something in the route. Let the controller repeat the route later. It saves you, and the controller, not only time but stress as well.”

Do you ever feel intimidated when making requests of ATC?