"What can and can't a pilot do once cleared for a visual approach?" — Mike R. 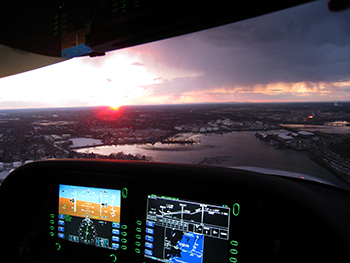 “A Visual Approach is an approach conducted on an IFR flight plan which authorizes the pilot to proceed visually and clear of clouds to the airport. The reported ceiling at the airport must be at or above 1000 feet with visibility of three miles or greater.

While on a visual approach you must remain clear of clouds, but you don’t need to maintain VFR cloud clearances. You’re still IFR. You must keep the airport or the preceding aircraft in sight at all times. You’re expected to proceed to the airport and make a normal descent to a landing. At a non-towered airport, you must comply with the standard traffic pattern. A visual approach clearance is not an authorization to make right traffic if it is not standard. At a towered field, you can proceed to the runway by whatever reasonable path you choose. Of course, you’re still subject to any instructions from the tower controller.

There have been several instances of air carrier aircraft landing at the wrong airport while on a visual approach. A common trap is nearby airports with similar runway alignments. It’s always good practice to use whatever electronic aids are available to backup the visual approach and maintain situational awareness. Some newer GPS navigators even have the provision to display a visual approach path to runways where using a published ILS or RNAV approach isn’t practical. Just remember those features have limitations. It’s also easy to choose the wrong runway, which the GPS will happily take you to.

An important point to remember is that there is no missed approach procedure for a Visual Approach. If you lose sight of the airport or have to go around for some reason, you are still IFR and a new clearance is required. Don’t accept a visual approach clearance if there’s any doubt you’ll be able to complete the approach successfully.“

Do you use a published approach procedure to back up a visual approach?